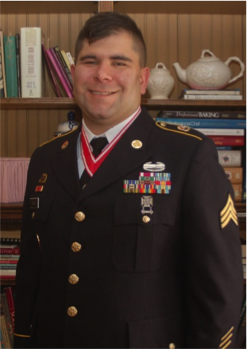 I was born on November 21, 1986 in Billings, Montana to Hector Alvarado and Candesa (Candy) Strait. My family has deep roots in Montana, as my father’s grandmother moved to the United States from Mexico when she was in her twenties and opened Momacita’s Café which is a wonderful hole-in-the-wall family restaurant in Billings. His mother eventually took it over and has kept it going since the late 1970’s; she is hoping that one day one of the family takes it over to continue the family business. I was raised primarily by my mother who was a Protestant, although not overly religious. She was a military brat, growing up all over the United States with her two sisters. Her father served in the United States Air Force for 28 years, and retired from the service as a Colonel in 1991. Her mother was a typical military spouse; she loved to entertain and take care of the household. My father also grew up in a Christian household with two brothers in Billings, Montana; however, as he grew up he became Agnostic. He eventually joined the U.S. Army and served for 11 years before he medically retired. After he got out of the military, he went to college to get his teaching degree and became an art teacher in Hardin. I grew up as an only child for the most part. My dad and my stepmom could not conceive, so they adopted a girl. I had a babysitter for most of my childhood, as my mom worked most of the time to support us. Around my friends, I acted as the conscience of the group and could recognize problems before they happened. When I was 13, I started taking care of myself and learned how to cook. That’s when I created my first recipe, a simple spaghetti sauce. My mother grew up with her parents doing a lot of formal entertaining and felt it was necessary for me to know how to entertain in a formal environment. However, I did not learn housekeeping and organizing until I met my wife, whose mother had her own cleaning business. I first realized that service was my calling when I became an Enlisted Aide (similar to a Household Manager for the military) in 2005 while serving in the U.S. Army. I have personally worked for seven different officers, performing administrative and housekeeping duties and hosting various military events. Serving in this capacity helped me develop my keen eye for detail. I consider myself to be a giver, to see a need and to fill a need. I love being able to help others when they need it or sometimes before they realize they need it. I consider myself to be a hard worker and very respectable and honest, which has made me be the person who always follows through with what I say I am going to do. I am looking forward to a Household Manager/Chef opportunity with a family or individual. Happy to travel with a Principal for up to three months at a time.