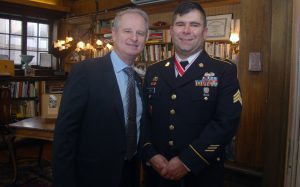 Starkey International will see you at MILITARYSTARS

Starkey International Institute for Household Management was described in New York Times article as “a hot second career for former members of the military, who may retire as young as 40, and are seen as trustworthy and able to take orders without flinching.”  Whether you’ve just begun transitioning, are looking for a job after serving in the Armed Forces, or are a veteran, Starkey and MilitaryStars help you transition successfully into your civilian career.  Bring your resume and we will see you on July 30th in Denver, CO.

Our friend Kelly Major from the  Navy just saw this and felt we all would enjoy reading.  I met Mr. Major while providing a special training at Camp David many years ago.  Thank you Mr. Major!

Enlisted Aide of the Year

Congratulations to all Starkey Graduates who participated in the USO of Metropolitan Washington Salute.  Since 1997, they have celebrated the skill and talent of the military Chef and Enlisted Aide during its annual Salute.  The honorees are nominated by the offices of the President, Vice-President, Secretary of Defense, Chairman of the Joint Chiefs of Staff as well as the Chiefs of staff and Commands of each branch of service.  This year’s chef honorees and Starkey Graduates are GySgt Brian K. Brazil, CS1 Michael Edwards, MSgt Jamie Green, CS2 Steven Horn, SSgt Paul Lane and CS1 Roland Tisdale.

Congratulations are also extended to The Enlisted Aide of the Year, MSgt Craig Duclos.  MSgt DUclos is currently stationed in Hawaii, serving in the U.S. Air Force.  You all continue to be our Starkey Stars and we are proud to celebrate and trumpet your success!